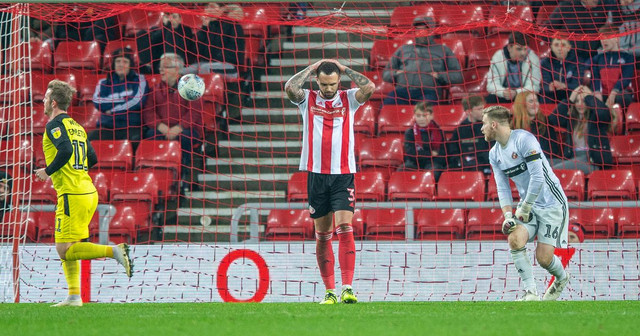 Sunderland collapsed infront of our eyes, players cowered in the presence of their own shadows and the only mystery to me was how Burton didn't notch a third. We surrended in all sense of the word.

We didn't get going for any sustained period of time, which is becoming a theme of Phil Parkinson's Sunderland. A competitive opening 20 minutes led to two goals in a minute, with our defence and goalkeeper combining to gift Burton an equaliser. In truth, for the next 15 minutes or so Sunderland responded really well. We created chances and looked like we had control of the game.

Then came the second half. Dear me.

Parkinson was called out by the crowd towards the end and the team promptly booed for what was, quite frankly, one of the most pathetic halves of football from Sunderland I've ever seen. No urgency, no ability, no courage, little accountability. It was embarrssing. Has there ever been a manager turned on quite as quicky as Parkinson? Surely there is a valid reason for that? Say what you want about Sunderland fans, but as a collective we're not daft.

I could rant on but that's not why you're here. It's your chance to do so. Below is all the players that featured for 20 or more minutes, you can rate them by selecting a rating from the drop down - you can also leave a comment. We'll use the comments to help us review the match further later today.