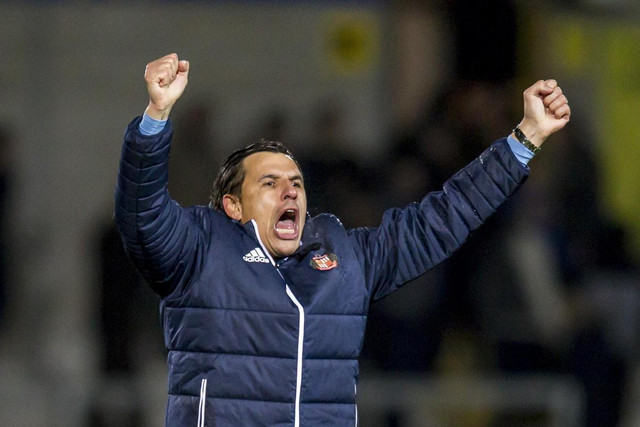 I’ve spent the last few week remembering the good times and thinking about some of the calibre players and managers we’ve had over the years. I’m starting to think that maybe...we are cursed as a club.

Martin O’Neil, for example, once upon a time was considered one of the wisest heads in the game. A calming voice in a storm. It seemed to be heading that way initially. The wins against Blackburn and Manchester City, it all seemed like it was coming together. Then it fell apart, Martin seemed uninterested in interviews. He became distant and the team seemed to follow suit. How did one of the elite fall so low? Was he a dinosaur? Maybe. He’s done okay with Ireland but terrible with Nottingham Forrest since then.

David Moyes was once considered one of the best managers in the Premier League at one point in history and some say sacked far too soon by Manchester United. Yet, he seemed to overstay his welcome at Sunderland by a long margin. He came in and said, although he has since admitted his regret in this statement, that we were going to be in relegation battle and set the bar very low. This lead to a memorable 4-0 win against palace. However, that is about it as far he was concerned. Relegation to the Championship and a quiet exit meant he will be quickly forgotten.

Simon Grayson, a stalwart of the EFL, a man known for turning clubs around. Didn’t get out of reverse and again seemed uninspiring. A man who’s tenure will most likely be lost in the history books as nothing more than a pub quiz answer. He seemed a sensible choice. A logical person to turn to. Based on his CV and history, it wasn’t difficult to see why he was picked. It didn’t get much better after he left.

Chris Coleman, a welsh hero, the man who took over Wales in the worst circumstances. After Gary Speed's tragic death, it must have felt like it wasn’t his job to take. I can’t imagine how long it took for him to make the job his own. He did though and was part of the inspiring Euro 2016 run; a team that gave England a scare after a late Daniel Sturridge goal saved England’s blushes. He seemed to say and do the right things, however the season didn’t get any better. I mean Ashley Fletcher...I still have nightmares.

Jack Ross, I’ve said more than enough on him. I miss him. I loved him. He dealt with everything with class and had a cracking poker face. Just read my previous articles...

Phil Parkinson, another logical choice. Again it was difficult to argue against him, he was the best of a bad bunch. That’s the key word really “bad”. His record was okay. He’s been given a better squad than what he may have been used to, but once again, uninspiring, spineless. Just terrible. Either the players don’t want to play for him or he’s a bad manager - maybe a bit of both. I’ve just never known a Sunderland team which folds under such little pressure. At least with Ross we had some fight in us, with Phil the lads just look deflated and so easily beaten.

The lads are missing not just their bite, they can’t even bark.

Anyone else would look at this mess and say that there is something wrong with this club. You don’t have the players and managers like we have had through the door fail so spectacularly. I will stand by the signing of Will Grigg. Absolute no brainer of a signing. We needed goals, he scored goals. We’ve yet to see him anywhere close to his best though.

I have a feeling the Black Cats will once again pay to ride the manager merry go round and I’d like to think we’d get a manager who can get the best out of these players.