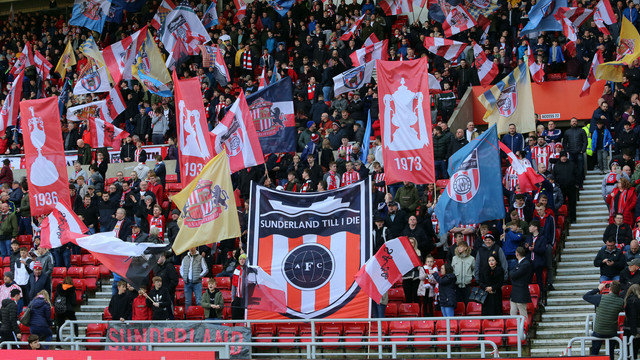 Why is it that when things go a bit naff our immediate instinct is to turn on each other?

The "happy clappers", the "ones who only ever say negative things", the "stayaways" etc. You haven't bought a ticket but you bought a ticket for a different game or in the Premier League or you're a holier-than-thou season card holder who looks down on the mere mortals who don't have such a shiny fantastic card in their wallets and purses. How dare you not go to the match, I demand you tell me why via social media this instant. How dare you go to the match and suggest I should do the same. What's ganin on man?

When we get to the match, we just want to enjoy ourselves. Have a drink, have a laugh, have a sing. Maybe even have a dabble in some sportings betting or even a few spins at the casino. And if that is how you like to liven up your match day, you want to check out moplay bonus code to get cheeky free money on your first bets. Maybe those pints will be paid for after that!

I don't get it why many of us Sunderland fans get so wound up on what another supporter does or doesn't want to do, or does or doesn't think to the extent we have to start segregating ourselves into daft clusters of people who ultimately all want the same thing. It's reminiscent of the intense political divide that grips the region.

I get why we want to encourage people to go, because no place on earth is as good as the SoL filled to the rafters with a bouncing atmosphere. But that is not what this is, not entirely anyway.

Whenever something bad happens, which is all the time when you're supporting Sunderland (look where we are!), you get the supporters who come out and lambaste the players, manager, chairman etc. That's fine, whatever, the club are not exempt from criticism and you're damn right we should've been promoted this season. What irks me is when you see this presented in a way that mocks whoever thinks the opposite, as if in some way because someone else doesn't have the same strong negative view - or, God forbid, a positive view - that person is not the same kind of Sunderland supporter as the other.

And then when these people appear on social media, the other side come flying in with their definitions of what supporting a football club means and how you should behave. Does such a thing exist? Provided you're not being a d*ck (needlessly hurling personal abuse at those who are doing their best at the club is an example of this), I'd say no.

I'm a season card holder. I've probably missed about six games this season, and a few of those have definitely been because I couldn't be bothered to go. I thought to myself, you know what, the wife and my two young kids fancy going somewhere for the weekend or just for a day out or whatever so I thought, eff the match. And I write for a sub-standard Sunderland website! Does that mean I'm not a Sunderland supporter?

My mate who sits next to me at work can afford a season card, he can afford to go to the match and there are probably many weekends he can go to the match. But he doesn't. Why? He'd rather take his kid to play football and spend his two days off work with the family he spends five days working to provide for. Does that mean he's not a Sunderland supporter?

My dad has never had a season card in his life. When I was a kid, I'd go to the odd cup match, but I'd always have the match on the wireless eating salt and vinegar twirls as my dad would listen in the kitchen making our tea. Does that mean he's not a Sunderland supporter?

If you believe that any lad or lass can live their life how they want, work in whatever field they choose, be in a relationship with whomever makes them happy, live where they want - then surely supporting Sunderland in their own way goes hand in hand with all of those. Does it not?

If you're going to the match tomorrow - fantastic, I look forward to seeing you there and I hope you help us create a tremendous atmosphere. If you're not going, good for you, I hope you have a canny day.

It all means the same thing at the end of the day.