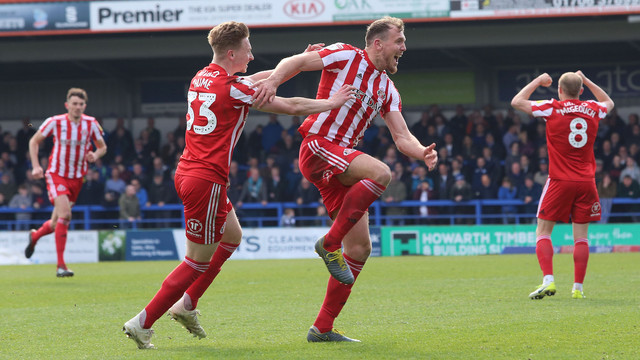 What could go down

There is no doubt that one of the most obvious changes to Rochdale from last season is how much more they value possession. They like to keep hold of the ball and move it about a bit hoping for a bit of space and width on the wings for their full backs to run into. This fits the game of League 1 veteran and Rochdale hero Henderson extremely well. He possesses the skill to drop deep and involve his team mates but is also a danger whenever he is in and around the area, be that with foot, head or any other body part he can legally get involved.

The number 10 Callum Camps can also be a real handful, less technical than you might expect for a player in that position but he creates in a 'bull in a china shop' kind of fashion and he can certainly stick his foot in for a challenge.

But on the flip side they’ve never came up against a midfield as strong as ours. No one has had much luck through the middle against us so far this season, but we have been exposed time and again down the left hand side, something which seems to have been remedied somewhat by the switch to a flat back four, but is definitely still a vulnerability that teams can look to exploit.

We’ve lost the movement and work rate of McNulty but suddenly Maguire, McGeady and Gooch seem to have found some form. Couple that with the fact that every time brick s**t house Charlie Wyke has come on he has looked a real handful, and proved absolutely horrible for opposition defenders to play against. A lot could depend on how much the ref actually realises that Wyke is ruthlessly strong and weaker players look to feign foul rather than try to compete with the big man.

If Ozturk and Willis can continue to be rock solid and combine well with Leadbitter to get attacks going, then we should enjoy a fruitful evening. Rochdale play very similar to Sunderland, but there’s no way they’re going to be able to combat the Black Cats with a bit of mimicry, all great pretenders get found out.

I expect a few goals tonight but that depends on how the lads start with the absence of McNulty affecting them. If we get on the score board early I expect 3 goals from our attacking four, if not then maybe 2, definitely 1, especially with McGeady absolutely rinsing plyers for fun recently. Id love a clean sheet but I don’t know if this is game that will bring it.