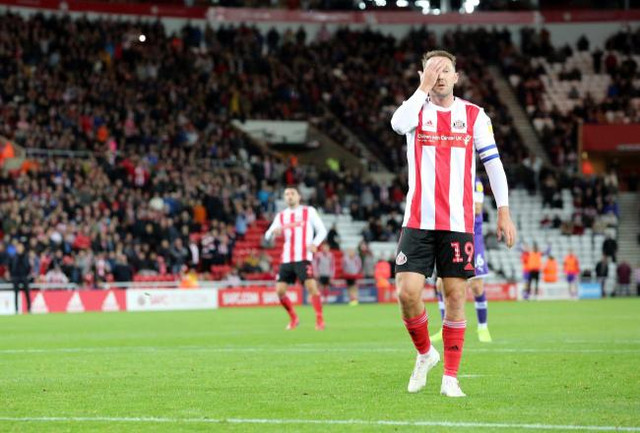 Even with just a tiny bit more nous in possession, and a general understanding that if you are trying to hit a team on the break you need to pass infront of the runner, we'd have been at least three up after 30 minutes. No player has missed more penalties for Sunderland in the last decade (maybe longer, if someone fancies doing the research) than Aiden McGeady, and last night's 'attempt' was as bad as you'll see.

In the second half we reacted to Rotherham's pressure by taking off our best player and removing all opportunity of a reasonable counter-attacking threat. I'm not his biggest fan, and I don't think his biggest fan is a Sunderland supporter, but Will Grigg would have been a far more natural choice given the way the game was unfolding if Marc McNulty was knackered (which is unconfirmed I may add). When Grigg and Chris Maguire did come on, they were thrown on in desperation and our attempts to nick a winner were indeed, desperate. Charlie Wyke didn't seem to be able to run, and when presented with a glorious 1v1 opportunity (where is seemed the keeper already decided to lie down), the striker fluffed it.

6 minutes added on time - crowd roars with encouragement - nah, sorry ladies and gents, we'll just smash the ball out of play and proceed to lump balls up to Wyke whilst deciding not to play a central midfield in injury time so no-one could pick up the loose ball. And, when we did finally fashion a decent opportunity, Luke O'Nien - who otherwise had a decent game - absolutely bottled it. Bottled it just like Sunderland bottled automatic promotion last season and bottled the subsequent play off final.

Fancy a crack at Sunderland blogging? Now the new season is underway, we're looking for a couple of new writers to join us, click here to drop us an email.

Argh, rant over. Anyway, you're here to read what comments were left and ratings were left yesterday. Allow me to present the results, in decending order from worst to best, with each player having a couple of the comments which were left. Generally, it's not pleasant reading, but I'm assuming you're a Sunderland supporter so you must be use to that sort of thing by now.

13th (and last): Conor McLaughlin - 3.9
Awful season thus far and this game no exception. Needs a spell out of the picture to build his confidence. - Anonymous

Took to the cleaners all night , lost his marker for their goal. Not a first team player for me. - Kenny R

=11th: Charlie Wyke - 4.8
Came on as a sub from his suspension of 1 match and he wasnt at his best, the Rotherham defenders kept beating him in the air and he had a great chance to score 1 on 1 but he hit right at the goalkeeper. Not one of his best days today. - Daniel Clark

Added nothing capped off with abysmal miss at the end. - Mike Ford

=11th: Chris Maguire - 4.8
Not good enough, persisting with high balls against giants compared to our players. Like cloughie once said, if we were meant to play football in the air the sky would have grass on it! - Jim cairns

Little time to get into game. - Slimjim

Worked hard to cover for the right back. Won the penalty through his tenacity...and should have taken it. - Anonymous

Jekyll and Hyde performance. Some great attacking play but never looked like he was going to score the penalty and dispossessed too often. - GG

By his own high standards he had a nightmare. Let the penalty miss get to him and you could see his frustration throughout afterwards, maybe too desperate to make amends. Deserves a pass and will win us plenty of points. - Anonymous

Not one of his better games, lacks positional sense will be lucky to hold down the his place in the side. - Kenny R

Too lightweight - backwards and sideways only. - Mike Ford

Needs to be more adventurous. - Anonymous

He has a lot of energy and really good in the first half, tackling, passing the ball and spraying good passes to the wide men but 2nd half was struggling to hold the ball and keep possession. - Daniel Clark

Covered lot of ground, round and round. - coachees

One important save, but not the player he was last season. - Kenny R

Did nothing wrong. - Slimjim

A quick decision led to our goal. His passing... - Anonymous

His original mistake led to their goal, otherwise fine. - Anonymous

Full of energy and drive but let himself down with indecision withe late chance. - GG

Played too far up in the first half - needed two in front of him for a home match. - Mike Ford

Lots of intelligent running off the ball, his pace and directness caused problems. - Anonymous