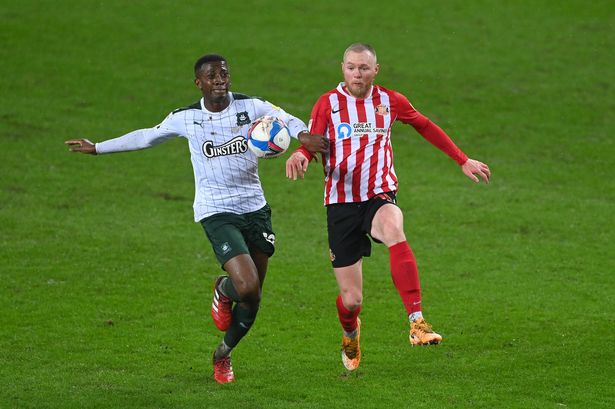 Argyle hit first scoring a well worked goal with Liverpool loanee Adam Lewis finishing the move. Just after the restart Sunderland hit back almost immediately with Aiden O’Brien scoring the equaliser before Plymouth put the game to bed in the 56th minute due to some sloppy defending.

Aiden O’Brien finally got off the mark in the league for Sunderland last night. Callum McFadzean floated a fantastic ball to the edge of the 6-yard area where O’Brien powered a header home.

Hopefully, this can be a starting point for a player who hit 13 goals last time he played in this division at Millwall. It must be said that Sunderland created some decent chances in the first half, with the majority heavily involving O’Brien.

Someone also has to take the goalscoring burden off Charlie Wyke, who went missing last night. Maybe O’Brien can be that man.

I feel like I have watched the same game so many times this season. The past few years the Stadium of Light must be one of the easiest places to come to in League 1 if you want a good away point.

Alarmingly, this trend seems to be worsening in recent months as MK Dons, Wigan and now Plymouth Argyle have nabbed 3 points against this stuttering Sunderland side. Every time a team in the lower half of the division comes up to the North East the same script is repeated; no Sunderland manager seems to have a way to counter it.

The Black Cats usually fare better against the teams towards the top of the division at home as they play a more open game and attempt to score themselves which allows for Sunderland counterattacks. However, when a team lower down the league comes to the Stadium, they will defend deep and make it look impossible for them to be broken down.

They will then wait for a calamity in the Sunderland defence and capitalise. After that, game over! This inability to beat teams at the lower end of the table at home has arguably cost Sunderland promotion for the past 2 years.

This was a bad night for Sunderland before a ball was even kicked. The pathetic state of the playing surface set the tone for the disaster we witnessed later. The pitch is just another sombre reminder of mismanagement and neglect that has occurred at the club for the last 2 years.

The pitch did not suddenly turn into a mud pool because of the recent harsh weather conditions. It has been getting poorer by the week over the past couple of months. Had this game been called off, it would have been deeply embarrassing for a club who has everyone connected it boasting about ‘top class facilities’.

I remember when Sunderland were first relegated to League 1 we found the state of pitches at smaller teams like Tranmere Rovers and Accrington Stanley laughable; little did we know that only a couple of years later the Sunderland pitch would be just as bad, if not worse.

Lee Johnson has already been very vocal on this issue as his playing philosophy has been affected by it.