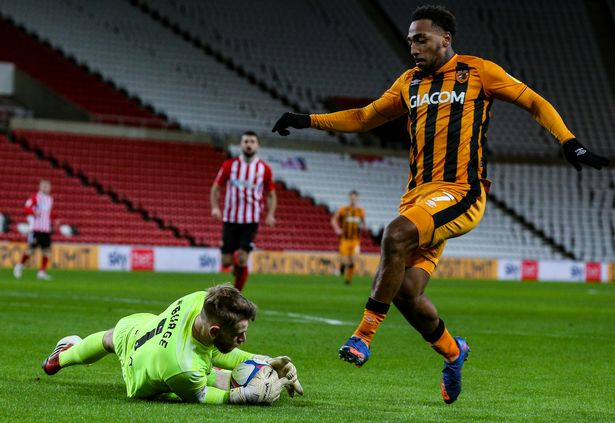 Reece Burke opened the scoring, tapping in from a Lee Burge howler. Sunderland then equalised shortly after with a fantastic header from well worked freekick. Here are my 2 Good and 1 Bad points from the game.

It is frightening how quickly Jack Diamond has emerged as a very important player for this Sunderland team. Almost everything Sunderland created last night went through him.

His raw pace and natural flair make him a hard player for defenders to deal with; his ability to create chances out of nothing had Hull ‘keeper George Long scrambling to tip a looping cross over the bar. He set up Sunderland’s equaliser with great determination to get to the byline and put in a superb cross for Aiden McGeady, who headed emphatically into the net.

Frustratingly, he does lose the ball on occasion, which is probably why Lee Johnson’s predecessor Phil Parkinson barely utilised him. As Diamond grows as a player, he will do this less and this could lead him to become an established member of the first team at Sunderland.

Johnson’s eagerness to get Jack Diamond involved signals the potential he sees in him even at this young age and right now it is paying off.

In the first half Sunderland played very poorly. They really struggled to create any openings. Charlie Wyke was a very isolated figure upfront on his own. The midfield 3 was not working either.

At halftime Lee Johnson changed the system from his favoured 433 to a 4231 formation, bringing Lynden Gooch on to replace Conor McLaughlin. This was an attempt to get more players surrounding Charlie Wyke and it worked to an extent with Sunderland looking much improved going forward.

Though, Wyke was having a poor game and with no real alternative to him on the bench this lessened the impact of the change.

Max Power moved to an unfamiliar right back position and surprisingly played well, though he could have not played much worse in the first half in central midfield. He made many forward runs down the flank and supplied a couple of teasing crosses into the box. However, the tenacious Power was caught out defensively on a few occasions.

With Conor McLaughlin currently nursing a hernia problem, Johnson might well explore this avenue as Power playing in midfield is proving ineffectual.

A major disappointment from this game was yet another goalkeeping error; Lee Burge made a pretty horrendous mistake on Saturday night.

Perhaps, you could say this was linked to the injury he sustained a couple of minutes into the match as Johnson referred to “blurred vision in his left eye”. However, Coventry fans would tell you otherwise. A clear weakness in Burge’s game is his judgement on crosses and the Sky Blues fans gave us fair warning about that. This was a very simple catch that he probably makes in training every day.

Many people thought Burge had put his errors behind him but this a throwback to his howler against Bristol Rovers where, yet again, he was caught out by a cross which led to him fumbling the ball and conceding a penalty.

Remi Matthews came on at halftime and managed quite well. Although, he was only tested with a couple of crosses into the box. He has been shaky to say the least since arriving from Bolton Wanderers in the summer.

The Black Cats are really struggling to create chances and score goals, so these mistakes are proving extremely costly. The decision not to renew Jon McLaughlin’s contract is looking more foolish by the day.

Why not try out quiz of the week looking at Sunderland players who scored in 2020? Click here to have a crack!