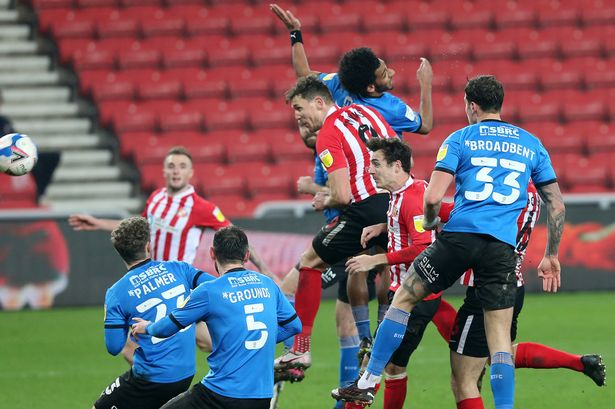 Sunderland lined up in yet another makeshift back three that included Luke O’Nien, Dion Sanderson and Max Power.

Although in the first 70 minutes the trio did not have much to do, they had to weather a late Swindon storm for the last 20. Which included Scott Twine hitting the crossbar from a freekick.

It seems incredible that Sunderland are keeping clean sheets with a defence made up of an attacking midfielder, central midfielder and a right back. In fact, that is now three clean sheets in four games.

Sanderson was vocal in the backline and looks to be emerging as a leader at the tender age of 21, whilst O’Nien marshalled the experienced natural goalscorer Brett Pitman throughout.

It also highlights how poor the League is this season and how automatic promotion is not and never has been an unobtainable target.

Changes from the Bench (Again)

Lee Johnson won this game from the substitutes he introduced from the bench. This Sunderland squad has a lot of attacking quality in it. However, most of the options Lee Johnson has available to him blow hot and cold and severely lack consistency.

For example, coming off the bench on Saturday, Jordan Jones turned the game on its head; he scored a screamer and constantly carried the ball forward. On Tuesday, Jones rarely threatened in the attacking third and consequently subbed in the 62nd minute.

He was replaced by Chris Maguire who excelled. Maguire set up Wyke’s goal with a delicious cross in the box from a freekick. Recently, Maguire’s delivery has been top class and it should only be a matter of time before he is introduced into the starting eleven.

Lynden Gooch was withdrawn with a calf injury and on recent form should have been nowhere near that starting eleven anyway. This is Maguire’s chance to stake a claim and he must take it. With more game coming down to fine margins, Maguire’s deadballs could be the key to promotion.

After the game Lee Johnson announced that unfortunately Conor McLaughlin would require to have an injection in his pubis which rules him out for a longer period. Another defensive injury means more midfielders having to play in defence.

The starting midfield last night was poor as it lacked a player who could play a forward pass. This Sunderland team is not used to playing longball football so bypassing the midfield is not an option.

Leadbitter is injured, Power and O’Nien must play in defence so the next couple of weeks Johnson is left with Scowen and Winchester as his only options.

They are not bad players, but they can only do a certain job. They are tireless and win the ball back well but find it difficult to use the ball in a positive way. With much of the play previously coming from midfield, Johnson will have to find yet another way of playing.

However, Johnson is it not complaining about having no centre halves, instead he is trying to do best with what he has available. He even attempted to find positives in this situation, stating that more technical players in a defence will lead to better passing. Thus, leading the attacking players tiring sooner as they must constantly chase the ball.

This is very unlike a certain Liverpool manager who spends much of his time complaining about injuries and often uses it as an excuse whenever anything goes wrong.