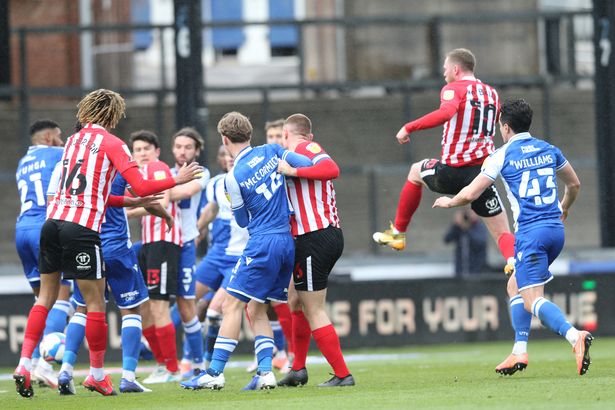 In a game reminiscent to two cats fighting, pawing at each other uncontrollably with much determination but little finesse, we took on Bristol Rovers at the Memorial Stadium this Saturday. A goal from Aiden O’Brien settled the contest mid-way through the first-half as we came away with a 1-0 victory; It was a difficult afternoon but the lads got the job done in the end.

Comment of the day: “Gets more confident each week” – Ian M

You can’t underestimate the difference it makes having a goalkeeper between the sticks that fills you with confidence and that self-assurance is being shown in bunches when it comes to Lee Burge. At no point yesterday did you think he’d concede, as he dealt with any threat the Bristol Rovers forwards possessed comfortably.

COTD: “Not as commanding but held Rovers front-line quiet” - Anonymous

It was an untypical performance from Dion yesterday as it was littered with a few mistakes that the Sunderland faithful aren’t used to seeing but it was nothing major and he’s a young man learning his trade in an incredibly demanding league; He was self-assured as ever despite those few poor decisions.

As he put his body on the line to clear the box of danger as the game drew to a close, you’d be forgiven to think that type of sacrifice is typical of Luke O’Nien and although it was literally only Joey Barton that believed it was a penalty, it was an excellent show of determination from Luke to do what’s necessary to bring the 3 points back to Wearside.

COTD: “In and out performance” - Tom

Solid when called upon but a largely ineffectual performance from full back for Max Power. Feeling among the support is that he can make more of an impact on games from the midfield but until our defensive issues resolve themselves we’ll have to make do.

A game without an error can’t become the benchmark for whether Callum has a good game for Sunderland. Errors shouldn’t be expected from a team fighting for promotion yet even if we were to measure his recent games against that supposed benchmark, we can’t complain about his recent development at full-back. Solid in possession most of the time, he looks to be growing in to the role as the weeks pass by.

COTD: “Getting there” - Coachees

Questionable switch of play that almost gifted a goal to Bristol Rovers aside, it was a solid performance from Winchester as he commanded the game in a more familiar defensive role. Somewhat guilty of not putting his foot on the ball throughout the first half when we could have done with the control in the game.

Another player guilty of not putting his foot on the ball and finding control when we needed it was Josh Scowen as he lashed his foot attempting to through balls to invisible Sunderland players on multiple occasions during the first half. Ball retention aside, it was a typically dogged performance from Scowen as he harassed the feet of the opposition throughout the game.

Lynden is struggling a lot at the minute and I’m not sure what Lee Johnson can do to help him rediscover his form; The Head Coach needs to help him become the player he has shown himself to be in the past because as it stands, Gooch has been nothing short of clueless and ineffective.

Another assist for Aiden McGeady as he whipped a delightful corner to the shin of Aiden O’Brien but it was his relentless grafting that stole the show for the Sunderland supporters yesterday as he worked up and down the pitch for the red and white shirt at The Memorial. His dead balls, assist aside, could have been better.

COTD: “Arguably his best game in a Sunderland shirt” - Anonymous

Returning to the squad and finding a goal courtesy of his shin-pad, it was a good performance from Aiden O’Brien as he came back to the team in search of full-fitness. He kept himself busy throughout and although he wasn’t much of a foil for Charlie Wyke as he previously has been, he found the opportunities falling to his feet instead and should have been coming away from Bristol with a couple of more goals to his name.

COTD: “Worked hard with no help from the referee” – Hill of Beath

Lee Johnson needs to discover a way to help Charlie out more as in recent games he has been hounded and doubled up on by the opposition centre-halves and it’s affected how much of an influence he has on recent games. He did battle well but mostly struggled without the help of the referee, who let the Bristol defenders get away with a large majority of the pushing and holding.

They say that Grant could have steadied the Titanic as it made its descent in to the ocean; Okay, maybe I said that but the metaphor was somewhat true yesterday, if not exaggerated. We needed somebody to come on and look after possession desperately and Leadbitter did that superbly as he took the sting out the sails of a Bristol Rovers side that were desperate to draw equal.

COTD: “Didn’t get in to the game much” – Tony Prenelle

Ross struggled to make an impression on the game as he came on to replace Aiden O’Brien in the second half. Looking for first team fitness himself, it may be a few weeks until he is fully up to speed and could be a vital weapon in our push for promotion.

It was a frustrating three points for Sunderland and it’s difficult to argue too much when we did come away with the victory but it feels as if that has been one too many lifeless performances from this team in recent weeks. Peterborough made a big statement with a 7-0 victory over Accrington and we certainly need to up our performance levels to match them in our game next week.