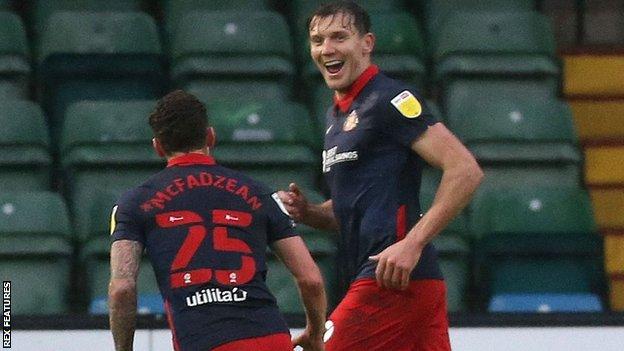 The Black Cats are flying high and haven’t tasted defeat in their last 10 games. In fact, they haven’t even conceded a goal in March. 5 clean sheets this month is a stat which will bring a smile to the face of any Sunderland fan. We’ve also scored 8 goals as well to boot, proving that Lee Johnson is getting consistency all over the pitch and the gestalt of the team which he has crafted is clear for all to see.

After putting the 48 year hurt of Wembley to bed against League Two promotion candidates Tranmere, the Lads went on to beat a spirited Accrington side convincingly.

In a fairly uneventful first half which consisted of Sunderland piling on the pressure and Stanley biding their time in waiting for counter attacking opportunities, it was the hosts keeper who had the most saves to make. After saving an excellent attempt from Jack Diamond, Toby Savin had to be on his toes to tip a header from his own player over the bar after Dion Charles’ attempted clearance went wrong.

There were some worries for Sunderland when Accrington were awarded free kicks in dangerous areas, as Stanley threatened a number of times from set pieces.

Luke O’Nien got himself into a great position and looked like scoring, but the tenacious utility man only managed to head wide as the first half drew to an end.

Sunderland boss Johnson could see that his players weren’t producing enough in the final third to significantly trouble the Accrington defence, which had tightened up significantly after their last two losses.

He hooked Jack Diamond and introduced January signing Ross Stewart to partner the prolific Charlie Wyke up front, and the big man from Scotland did not disappoint.

The £300,000 signing from Ross County only needed 17 minutes of football to prove why the club had pursued him despite him being injured. Lynden Gooch was the provider, floating a lovely shot into the danger area. Stewart showed impressive athleticism to leap higher than those around him, looping a header over the opposition keeper and into the back of the net. 1 medal, 1 goal and 1 game for the big striker.

Charlie Wyke was not about to be outdone however, the No.9 had been a nuisance all night for the Accrington back four but hadn’t yet managed to get on the score sheet. Max Power grabbed the assist, sending a corner into the front post which Wyke gladly nodded home for his 22nd goal of the season.

The Imps season is currently in trouble. After storming the opening half of the league campaign and sitting at the summit for a number of weeks, Lincoln have slipped out of the automatic promotion places after a number of disappointing results.

Michael Appleton’s side have been ravaged by injury of late and have struggled with a number of key players absent for long spells. This has had a noticeable impact on how competitive Lincoln can hope to be in games.

They have won a single game in their last seven fixtures, a resounding 3-0 victory over Crewe. Many Lincoln fans would have hoped that result was a turning point following a number of poor performances, but that was followed up with a draw and two losses to Ipswich, Rochdale and Gillingham respectively.

The Imps’ last result against the Gills was a thumping 3-0 loss where the absence of key players was resoundingly felt throughout the team.

Gillingham’s opener was an almost comical affair, with the Lincoln defence unable to clear a ball in their box. The panic on display was reaching a concerning level of hysteria before former Imps striker Vadaine Oliver nodded home to open the scoring.

It only took 10 more minutes for Gillingham to add their second when Kyle Dempsey got on the end of a John Akinde through ball, and smashed his strike past Lincoln Keeper Alex Palmer.

The scoring was not over for the evening and unfortunately for Lincoln fans, it was another Gills player who scored a third for the Kent side. Young left back Cohen Bramall was a little overzealous in challenging Jordan Graham in the penalty area, bringing the big winger to the floor in clear view of the referee who did not hesitate in pointing to the spot.

Former Aston Villa academy product Graham coolly stepped up to the spot to dispatch the penalty he had just won, completing a 3-0 dismantling of the hosts.

It’s difficult to know what to expect against a side which has changed so much of late due to injuries. The Imps have predominantly played a 4-3-3 for the vast majority of the season, but Appleton chose to deploy his side in a 4-4-2 against the Gills.

Attacking midfielder Jorge Grant has scored 13 goals and provided 10 assists for the Imps in a sublime campaign, but has picked up a season ending ankle injury and will be unavailable. Joint second top scorer Tom Hooper pulled up with a hamstring injury against Gillingham and will be unavailable for selection. He joins star defender Joe Walsh in the treatment room who is recovering from a torn calf muscle.

Lincoln fans can take some positivity from the fact that former Sunderland midfielder and current Imps captain Liam Bridcutt should be available to play against his past employers.

At their best Lincoln love to retain the ball, work the channels and pass the ball into space, something which served them well when they had their strongest team available.

Unfortunately a squad which is very light on playing personnel is not equipped to effectively deal with injuries to first team players.

Some of the defending against Gillingham was simply horrifying and that will surely be an area that Michael Appleton will be looking to improve on Saturday.

Lincoln do have young Anthony Scully available who has managed a modest 9 goals and 5 assists this campaign and fellow 21 year old Callum Morton has recently returned from a long injury lay off, proving that Lincoln won’t be a blunt attacking force in Saturday’s contest.

Sunderland struggled to break Accrington down in the first half on Wednesday. It took the introduction of Ross Stewart to break the dead lock, but the big Scottish striker admitted himself that he still needs more minutes to get up to speed.

It looks like Sunderland will again be without dangerous winger Jordan Jones, so we may well see Stewart start if Lee Johnson perseveres with the same shape which he finished with against Stanley. Black Cats fans may get to see Denver Hume on the bench after the left back was sidelined during Johnson’s first game in charge against Wigan all the way back in December.

The outcome of this game will depend upon how Lincoln deal with their injuries and the pressure of falling out of the top two. I suspect it may be too much for such a young squad to deal with, especially one missing key players who have mature heads and can bring stability and confidence.

After falling foul of my last prediction by a single goal, I’m going for a 2-0 win. We have a semblance of a settled team and their is competition all over the park for Sunderland which seems to be bringing the best out of our players.

Again I expect Wyke to get a goal, especially after the calamitous aerial defending that Lincoln displayed against Gillingham. Max Power and Carl Winchester have found themselves in some decent positions around the box lately, we could get a goal from midfield as well.

To be honest, I just want us to keep this run going and get out of this cursed league. We’re full of confidence and as long as the lads stay grounded they should have too much quality for the East Midlands side.

Tell us what you think will happen @WeAreWearside