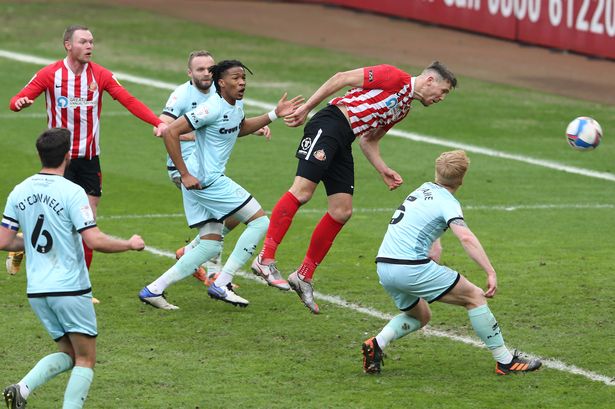 Fortunately for us that potential banana skin was swerved and swerved with an assured and professional performance. The things you love to see, eh?

Comment of the day: “Very solid, no mistakes today” - MikeF

Bar the game against Crewe, the past five games for Sunderland’s goalkeeper have been largely quiet affairs with little to do. Word is that he’s spent most of the games checking out our new subreddit (r/WeAreWearside) whilst watching the marshalling the back four in working hard to keep another clean sheet. A superb save in the second half was the highlight of his day.

COTD: “A class above” – Ade Fielding

£500 million, that’s my starting offer to Wolves; Take it or leave it. This is the problem with loans, isn’t it? Most of the time they don’t work out but when they do, it’s often hard to let go of a young talent such as Dion Sanderson. A first league goal yesterday as he rose at the back-post to head in from a McGeady cross and as for the defensive side, impeccable and lead by example. He’ll be a big miss at Wembley next weekend.

A first league start yesterday for the Sunderland youngster and a good performance to boot considering he was played out of his natural position. Strange decision to be taken off early in the second half but I’m sure that was a tactical decision rather than anything to do with Ollie’s performance. I’m sure the supporters are looking forward to seeing more of him in a Sunderland shirt.

After a torrid time defensively against Crewe last weekend, although much of the same could have been said for the rest of the team that day, O’Nien had a great day yesterday and never really looked out of place in his unfamiliar role. Put his body on the line by making a superb block to yet again secure another clean sheet for the Black Cats.

You can give credit to McFadzean for one thing, he’s unpredictable and I don’t even mean on the football pitch where such a quality would be beneficial. I just mean he’s unpredictable in how the supporters will assess his performance because you really don’t know what you’re going to get; Yesterday was a quiet performance, no clear-cut errors and what he did do, he did well and without much problem.

A steady performance yesterday from the Sunderland captain yesterday, who was struggling to keep his balance in the opening stages of the game for some strange reason but as soon as he found his passing range and composure, he kept the ball moving steadily and pressed well against the Rochdale midfield.

COTD: “Was settling well until his injury” - Tom

It was a solid showing from Carl Winchester up until injury forced him off in the second half and it was the type of performance you’d expect from a holding midfielder, moving the ball well and encouraging an impressive press in the midfield. We’ll all be hoping he kicks on in what is set to be an important week for the club.

The Rangers loanee may bemoan the fact he’s missing out on the title celebrations of his parent club but for SAFC, he has shown his ability to make an impact and yesterday’s assist for Charlie Wyke’s goal was an example of that influence. He does tend to drift in and out of games but one thing that Sunderland as a team having been crying out for is pace and he brings pace and drive in abundance.

That’s 11 assists now for McGeady since he returned to the team and he started brightly yesterday as he opened up the Rochdale defence with his usual box of tricks. It was a much quieter second half for him but let’s just hope he’s saving himself for the daunting run in of games we have coming up.

Although he hasn’t brought a lot to the team in terms of goals and assists, you can’t fault the effort of Aiden O’Brien when it comes to working hard and taking the attention away from the likes of Wyke, McGeady and Jones in the Sunderland frontline. It’s not often pretty and there’s not much adulation from doing it but his inclusion in the team for doing what he does is understandable.

You don’t often sign a striker in the January transfer window and not having the supporters clamouring for their inclusion to the side as soon as possible but credit to Charlie Wyke for stepping up this season and showing why we decided to spend the money that we did on him; I have friends that support Bradford and Carlisle and they swore by the big man and now we can see why. Another bullet header and that’s 20 goals this season with still enough games to get another 20 more I reckon. What did happen to Ross Stewart anyway?

Another game off of the bench and a lot of the support are hoping to see him make the starting line-up again in the near future. Came on and offered quality and invention to a tiring Sunderland attack.

COTD: “Always brings something to the game”- Polly

Coming off the bench to add some energy to the Sunderland midfield, it was a largely quiet performance from Scowen but his tirelessness was imperative to maintaining control of the 2-0 lead.