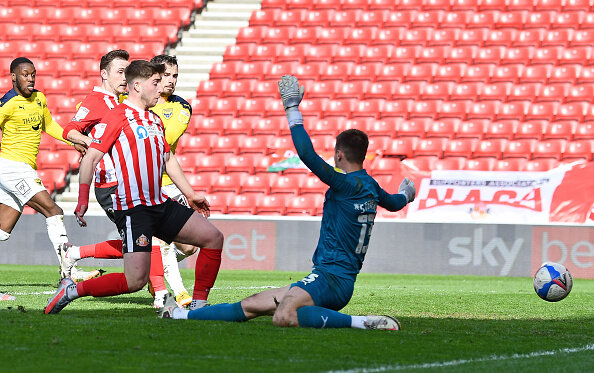 The return of Jordan Jones was touted as big boost for Sunderland entering the Easter period and the loanee did not disappoint. His assist for Lynden Gooch was fantastic, turning Jamie Hanson inside out before teeing up the American for a tap in. Jones also rattled the cross bar before being replaced midway through the second half.

More excellent wide play set up Sunderland’s all important second goal as Gooch weaved past two before setting up Aiden McGeady to finish excellently from outside the area. This was one of Gooch's most impactful performances of the season and his graft off the ball helps make Lee Johnson's decision on whether to keep starting easier.

Jones stole the show though, causing all kinds of problems for Oxford and putting in a massive shift to boot. He earned five fouls and won a whopping 13 ground duels including four successful tackles.

Sunderland have showcased a soft underbelly for years, struggling to combat aggressive oppositions and unable to turn goal deficits into wins. It has been a major plague on our stay in League One and our harrowing journey into this division. Today the Lads showed some steel and dominance in victory.

In the air the Black Cats were supreme winning 75% of aerial battles. Special mention to Charlie Wyke, Dion Sanderson and Conor McLaughlin for having the biggest impact here. They also won 50% more duels in general than Oxford and stood tall to the away side’s crossing onslaught.

This is all without mentioning the mental game that Sunderland were clear winners of. Sh*thousery at it's finest. The halftime tunnel allegations will likely never be solved, but on the pitch Oxford lost the plot somewhat as Mark Sykes received his second yellow card whilst his side fouled 20 times.

It was awful. McGeady started a string of woeful play from Sunderland as he cheaply gave away possession, but this was on the right-hand side of Oxford’s penalty box – along way from goal. Brandon Barker effortlessly outpaced a leggy-looking midfield who took an age to react to the situation. Fullbacks were nowhere to be seen as James Henry received the ball out-wide and fired a low shot home that Lee Burge is probably disappointed he didn’t react quicker so he could get down in time to save.

All in all, it was a cringe-fest and a passage of play we can’t repeat on Monday.