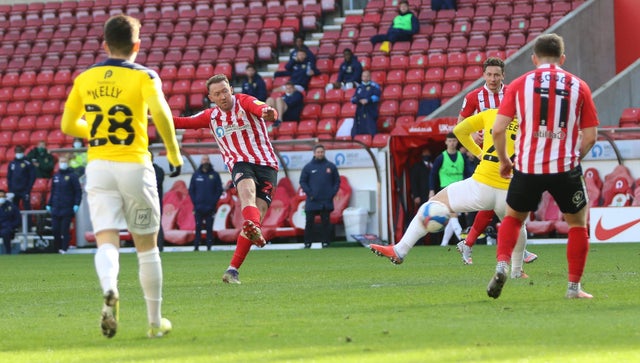 Oxford aren’t exactly flying in the league this year, in comparison to their previous seasons it’s somewhat of a failure of a year in terms of their expectations but they came to the Stadium of Light on the back of a 2-1 win against our promotion rivals, Lincoln. How would Sunderland thank Oxford for their kindness? By doing them in 3-1 and running away from the SOL before the police turned up; Just Sunderland things.

Comment of the day: “Solid display, no chance with the goal” - Alfa

There wasn’t much Burge could do about the Oxford goal as it darted past him at his far post in a style reminiscent to an arrow from Robin Hood. Despite the goal conceded, it was a quiet game for Lee, who was dependable when called upon.

Following on from an untypically shaky performance last weekend, it was back to basics and then back to the Dion that we’ve grown to love watching this season. The Oxford attack was bright and busy but Sanderson controlled the backline like a man who’d been there, done that and worn the T-Shirt.

That’s two games in a row where Luke has put his body on the line in the closing stages of a game to make sure of the points for Sunderland and it’s that bravery, determination and reading of the play that has benefitted him in excelling as a “pseudo-centre-back” in recent weeks.

Quiet game from McLaughlin as he returned to the side after being out from International duty. At times you can definitely notice he struggles to keep up with the quicker teams that we play against but quite often his experience shines through.

COTD: “A trier but not that effective” - Anonymous

Not much to be said for McFadzean as he didn’t really seem to get involved in too much in both attacking and defending positions. As with McLaughlin, struggled with the pace of the Oxford front-line but unlike McLaughlin, he struggles with the defensive knowledge to cover his weaknesses.

Deserves a high rating just for the celebration, no? If there’s one thing that Sunderland supporters have been crying out for since our relegation to League One then it’s the ability to “sh*thouse” our opponents in the way that they have done to us on so many occasions; Yesterday was a bite back from the Black Cats and it has been a common theme since Lee Johnson took over. As for Max’s performance, it was often sloppier than usual but his work-rate can’t be questioned.

Here’s another player who’s work-rate can’t be questioned but often seems to be the only thing about his game that you can’t complain about. I’d love to see Scowen put his foot on the ball and control the games better, it’s all too often that we need to rely our more technically gifted forwards to do that job.

What a performance from Jordan Jones, as he returned to the side after a lengthy hamstring injury and boy did he show what the Sunderland team had been missing. Full of pace, direct running and no fear, he tormented the Oxford defence throughout and broke through excellently as the half-time whistle approached to set Lynden Gooch up for the equaliser.

COTD: “Another show of class” - Freddles

Aiden woke up and felt like scoring a goal this weekend instead of assisting; As the game approached the end, he placed a fantastic shot in to the bottom right corner to send Sunderland on their way to 3 points. His work-rate throughout the game was astounding.

COTD: “Improved when playing as a wing back” - Huck

It’s a weird one with Lynden because without the goal and the dazzling assist, it was another average game from the “Californian Messi” but it’s a goal and an assist, game-changing moments provided from a player that does know how to be in the right place at the right time but his decision making is usually the thing to let him down. Not so much today and for that, well done Goochy.

Is it too early to start talking about a goalscoring drought? I think it is, just a little bit. It was another difficult game from the Sunderland no 9 and again it wasn’t a task made any easier by the service provided to him by those around him. That being said, he could have done a lot better with the one chance he was expertly given by McGeady but the big striker fluffed his lines.

Almost scored from his first touch and what a moment that would have been but it wasn’t to be for the “Loch-ness Drogba.” He ran around well for the closing stages of the game and supported Wyke in holding the possession as Oxford pushed for an equaliser.

You can say what you want about Lee Johnson but no matter what, he seems to know how to get a response from these players if they have a poor first half. Coupled in with clever subs, it worked a treat yesterday as Sunderland got themselves the victory in the end. A big 90 minutes will be needed for the game against Peterborough on Monday though, rather than the big 45 we’ve had in recent weeks.