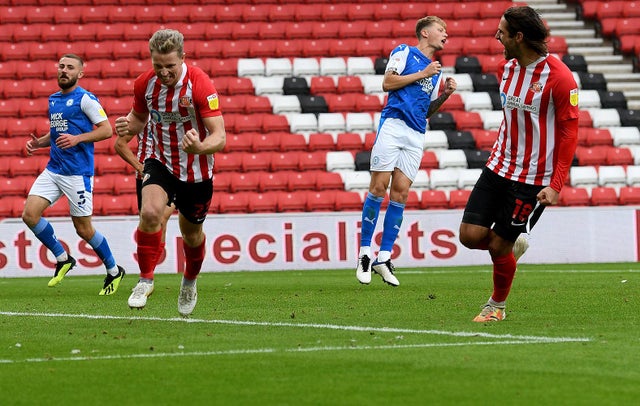 Football, fighting or both? The Oxford game had a bit of everything to satisfy pugilists and football fans.

Sunderland played Oxford in a feisty affair at the Stadium of Light on Good Friday and that game had it all.

Karl Robinson’s side were physical and got stuck into their opposite numbers, killing any continuity or attacking cohesion that Sunderland attempted to put together.

As frustrating as this was for home fans to watch, it worked. Sunderland created little in the first half after a bright start. Every time a Sunderland player broke they were brought down which allowed the Oxford defence to reset. The lack of any reprimands from the referee only encouraged this to continue.

After a few half chances where neither side could establish a sense of superiority, Oxford broke after McGeady lost possession in the opposition half. Winger Brandon Barker opened his legs for the U’s and carried the ball through the centre of the pitch before finding James Henry on the opposite flank. The midfielder didn’t even need to take a touch, smashing a ruthless shot into Lee Burge’s far corner from outside the area. In all honesty it was a quality finish but it didn’t impact the Wearsiders, who continued to play as if the scores were level.

The U’s continued to play positively and Sunderland struggled to create anything until an Aiden McGeady free kick forced a save out of U’s keeper Jack Stevens, and it was a sign of things to come.

A wonderful cross field ball unleashed the returning Jordan Jones into space on the right hand side. The on loan winger used his skill and pace to jink past two Oxford defenders before calmly slotting the ball to the waiting Lynden Gooch at the near post and the American international tapped home from close range. Simply a joy to watch.

Oxford almost replied in the early stages of the second half, but things went from bad to worse for the U’s.

Good play down the right from Olamide Shodipo allowed the winger space and time to put the ball into the Sunderland box. Luke O’Nien beat Mark Sykes to the rebound and the U’s player took the centre back out with a poorly timed challenge. As Sykes was already on a yellow card, the referee had no choice but to give him his marching orders.

The fact Craig Kettle was beginning to enforce the rules of the game was having a positive impact for Sunderland. The Black Cats no longer found themselves scythed down when they broke into space, with Oxford wary of losing further personnel to indiscipline.

This was not the end of the drama or the red cards. Cameron Brannagan who I had very much praised in my last preview, decided to have a little lie down on the pitch when Sunderland received a free kick in a dangerous area outside the Oxford box. The issue was, the midfielder decided to have his lie down after captain Max Power had already taken the quick one. Lynden Gooch on the right passed to McGeady in the centre who clinically dispatched the home sides second to take the lead, a wonderful finish which curled low into the bottom right hand corner.

This was simply too much for U’s manager Karl Robinson to bare. The Oxford manager let his temper get the better of him and unleashed a tirade of abuse at the officials which rightly earned him a sending off to go with Syke’s earlier.

It was rather pathetic to see the Oxford manager choose to call the referee a see you next Tuesday after he was given his marching orders, and one does wonder if this type of behaviour impacted on the players he had remaining on the pitch. Hardly role model material.

Oxford desperately poured forward in search of an equaliser, but it was Sunderland who would wrap up the scoring with a third.

Charlie Wyke got on the end of a clearance and broke for Sunderland. He slotted a pass to Max Power who was steaming into space and the captain calmly scored the last goal of the game.

Cheekily, Power ran from the Oxford goal to their technical area to celebrate in front of the oppositions subs and staff. Naughty but class.

The Posh have endured a pretty disappointing March which saw them notch a single, solitary win. I must admit, that was an impressive mauling of Accrington Stanley who capitulated and conceded 7 to the home side but that does not cover for the disappointment of the other 6 results.

It took 89 minutes for Darren Ferguson’s expensively assembled attacking side to break the deadlock against Fleetwood Town in their latest game.

Peterborough had the better chances of the two sides throughout the game, forcing saves and seeing good strikes find the cross bar and defenders bodies to deny them goals.

Fleetwood almost scored the opener through left wingback Danny Andrew who shot just wide from a free kick and he almost scored again moments later seeing his attempted shot clip the bar and over.

Ultimately it was Posh’s attacking quality which told. In form striker Johnson Clarke-Harris curled a low free kick into the back of the Fleetwood goal, notching his 26th of the season and cementing his place as League One’s top scorer - 4 ahead of our own Charlie Wyke.

Sunderland look back to full attacking strength now Jordan Jones is fit and available. When the on loan Rangers winger isn’t in the squad we’re just not as dangerous.

January purchase Carl Winchester goes from strength to strength and is fast becoming the most important player in Sunderland’s midfield. His poise and range of passing has really improved how quickly we can transition from attack to defence and our tricky wingers have clearly benefited from this as they both relish being in space with a defender to beat.

Defence remains a worry with Bailey Wright expected to still be out, but we should see Denver Hume return to the bench at least. Callum McFadzean has been admirable and at times impressive covering for the academy product and it will be interesting to see how he responds to the competition for the left back birth.

The attacking threat that Peterborough possess in their ranks is undeniable. Clarke-Harris sits at the summit with an incredible 26 goals and the big forward is certainly a force to be reckoned with. He’s a danger with his feet, his head and from a set piece, it was his free kick which earned the win against Fleetwood.

Sammie Szmodics who the Posh purchased from Sunderland manager Lee Johnson’s former club Bristol City has scored 12 from attacking midfield and he’s chipped in with 5 assists.

Scotland international Siriki Dembele hasn’t been as prolific in front of goal as his colleagues, but he’s managed 10 assists and 8 goals. He’s had a period out injured but returned against Fleetwood and should be available for Monday.

That’s 46 goals between the attacking tripod, the same amount as Blackpool have managed all season, and they will pose the main threat for the Posh.

The problems for Peterborough lie in their defence which has let them down on a number of occasions this season. The Posh do not have the same quality to keep the goals out of their own net as they have to put them in the oppositions’s.

Fleetwood caused problems down both of Peterborough’s flanks, but especially the right and that happens to be where a certain Jordan Jones thrives.

If Sunderland can contain the attacking threat that the three aforementioned players bring, they stand a good chance of coming away with all three points.

Peterborough will be looking to win their 15th home game in the league this season and Sunderland will be hunting for their 11th win on the road. Let’s hope Lee Johnson prevails over Darren Ferguson, a result which sees Sunderland into the automatic promotion spots.

To add further spice to this fixture, top of the table Hull take on Northampton Town. The newly promoted Cobblers have saw a number of positive results and with the Tiger’s struggling recently that result could well go Sunderland’s way, which would see us level with the Tigers on points but most likely trailing by goal difference.

I have been trying to be a little ambitious in my predictions following a couple of narrow wins. I went for 2-1 last time out but the quality of Jones and McGeady led us to a 3-1 victory.

I’m going to go for 2-1 to The Lads, obviously. I think Peterborough’s pitch is going to be a problem for both sides, but I doubt that’ll have too big an impact on the work which Jones and McGeady like to do close quarters. Wyke is a constant threat and as we saw last time out against Oxford is capable of being involved with goals, beyond just scoring them.

My only worry is that Luke O’Nien could be tempted into a rash challenge if the likes of Dembele and Szmodics run at him directly, but I’m hoping our superior midfield should keep those opportunities down to a minimum.

Dion Sanderson loves going up against big, physical players and he will relish his battle with Clarke-Harris and I expect the on loan Wolves man to come out on top.

McGeady is red hot at the minute, I’d back him to get a goal any day with the form he’s in.