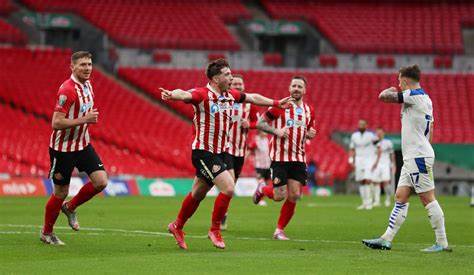 Sunderland travelled to the Memorial Stadium to take on relegation threatened Bristol Rovers. The Lads struggled to consistently maintain pressure on Joey Barton’s new side in the first half.

The Gas were very physical and made it extremely difficult for Sunderland to put together attacking phases of play.

Whenever Bristol regained possession they played very direct which unsettled visiting back four and forced a number of mistakes from the usually unflappable Dion Sanderson.

A long ball over the top caused O’Nien and Sanderson some issues, with the latter taking a heavy touch which Rovers striker Jonah Ayunga almost took full advantage of. Sanderson recovered quickly enough to pressure on the big striker and Ayunga thankfully shot well wide of Burge’s goal.

Down the opposite end Bristol were almost caught out by a sneaky quick free kick. The Gas were organising their defence when Wyke quickly tapped the ball into space in the box for Lynden Gooch, but the Californian could not make the most of the cunning advantage he had been given and the Bristol keeper made a good save from a deflection off his own defender.

Aidan O’Brien was the man to score the only goal of the game, hitting a scruffy volley from a McGeady corner on 39 minutes and sending Sunderland into the changing from at half time in front.

The second half was not without its chances but neither side could make them count.

O’Brien blasted over the bar, big Charlie had a couple of shots and McGeady curled a sublime free kick onto the post.

Lee Burge ensured the win when he parried a David Tutonda volley around his own post during the dying minutes of the game.

Despite the Gas’s noble desperation in searching for an equaliser, Sunderland marched on victorious with another win and another vital three points.

The U’s have struggled to put together a string of good results throughout the current league campaign. Every time they pick up a couple of wins and look like they’re going on a run they’ll suffer a shock defeat to below par opposition. They beat promotion rivals Doncaster 3-0 and then followed that up with a 2-0 loss to what was an in form Blackpool side. Surprisingly they then fell to another defeat by a single goal against struggling Northampton Town.

Karl Robinson’s side then put two past Lincoln 3 days later to come away with the win.

It’s been a hell of a ride for Oxford fans who should expect to be in the play-off places at a minimum with the players in their squad.

An away win for Oxford could potentially propel them into the play-off positions, so expect them to come out and play today.

Sunderland have dangerous winger Jordan Jones back from injury after missing the last few games. The return of the double threat that Jones and McGeady provide on wither flank will make us an altogether more difficult team to play against. Denver Hume is close to a return from injury, but Lee Johnson is understandably being careful with the academy product who has already suffered a setback in his rehabilitation.

Oxford have some wonderful players at their disposal, some of whom would get into most League One sides. Veteran striker and top scorer Matt Taylor has managed 14 goals this season, not bad at all as long you’re not comparing him with Sunderland hitman Charlie Wyke.

Cameron Brannagan is a fantastic player who could easily play in the Championship. Statistically he hasn’t had the stellar season that most would have expected from him but Oxford have struggled for consistency as a team, which will have hurt the young playmakers contribution. He has an impressive range of passing and the skill to score from outside the area. Keeping him quiet will go a long way to negating the threat the Oxford pose.

After predicting good wins in our last few games I’ve come to realise that Sunderland are not the same threat without Jordan Jones on the right hand side. Without the on loan Rangers man opposition defences know they simply have to contain McGeady and martial Wyke to keep us from scoring. We’ve also lacked a bit of urgency and tempo in our passing and movement, but we tend to play better against the better sides in the division. So I am expecting an improved performance than the grinding win we got against Bristol Rovers last weekend.

I’m going to go for a 2-1 win for Sunderland. After a couple of tepid performances I’m hoping the Lads can get right back on track with a good performance. I still worry about our defence, but if Peterborough slip up against Fleetwood we could find ourselves in the automatic promotion spots for the first time this season. Surely that will be motivation enough to drive us on to another victory and 12 games unbeaten.