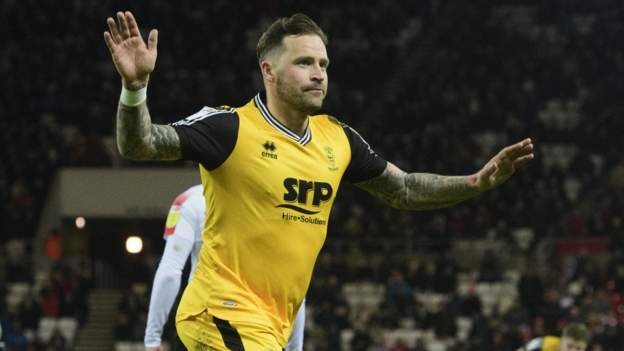 Sunderland are in a can't-lose situation with teams around us picking up points everywhere. We travel to Lincoln on Saturday; what can we expect?

Lincoln have had a torrid time of it in the 2021/22 campaign after losing the playoff final last year. The languish in 18th at the time of writing, with probably too many points to be concerned about relegation; but a campaign of regret to reflect on.

Recently, the Imps have looked better. With two wins in their last four games, one of which against an in-form Sheffield Wednesday, Lincoln also played admirably against league leaders Rotherham. Ultimately they lost a game which they were fairly dominant in because of two early goals from Rotherham's Ben Wiles and Chiedozie Ogbene within three minutes of eachother. A late goal from Tom Hopper was too little to late.

Despite a disastrous turnaround in form this campaign, Lincoln have admirably stuck by their manager Michael Appleton who since a new contract last year. They will be hoping their eight points and a game in hand will be enough to keep them above the trio of teams on 33 points below them - Wimbledon, Fleetwood and GIllingham - and Morecambe on 32. It should be more than enough.

Lincoln do not need a result, Sunderland absolutely do according to https://www.casinoadvice.io/. Sheffield Wednesday and Wycombe are poised to capitalise on any slip ups from the Lads and we simply need to win. Outside of the playoffs, we have only lost once to Lincoln which was ironically the reverse fixture this season. Perhaps a testament to our weird ability to beat the better teams and lose to the poorer teams in the league.

That was the scene for Chris Maguire's infamous hattrick against his former club, though the Scotsman has barely made an impact for Lincoln otherwise; earning more than twice as many yellow cards (9) as he has scored goal (4). Ever the enigma.

At the moment Alex Neil has almost no injury concerns and after a poor opening half against Crewe, best sports betting australia reports that Neil is likely to change his starting line up. Callum Doyle is ready and waiting for his opportunity to return to the back line which will probably consist of three central defenders. Danny Batth is unlikely to be ready to start.

Patrick Roberts has given Neil something to think about after scoring a superb goal against Crewe. He was largely inaffective against Fleetwood, though Lincoln are less likely to be as defensive so perhaps Roberts would get more space to run at a back-peddling defensive line. It will be interesting to see whether Neil persists with Jermain Defoe and Ross Stewart up top, which I hope he does, to give the promising partnership a little bit more time as it could be crucial to any success we have running until the end of the season.